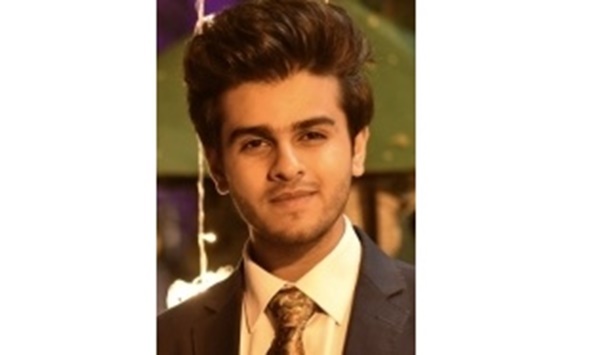 Muhammad Asad Ullah Published on February 05, 2021 | 12:19 AM
Pierpaolo Piccioli, Creative Director of Valentino, takes the final bow after a breathtaking showcase of Haute Couture Spring Summer 2021 collection.
Valentino Haute Couture
Valentino Haute Couture
Valentino Haute Couture
Couture embraces worlds. If the skill of extravagant flourishes of drapery can be pulled off anywhere in fashion, it ought to be in haute couture – the highest order of dress making. The haute couture season is always wanting someone to let loose with feather, wildly clashing colours and an unbridles sense of fantasia, though without going down any tiresomely stereotypical princess route. Although such extravagant satin bows, taffetas and silhouettes flowing down forming perfectly tailored ensemble with floor sweeping trains are a fantasy but tossing it around and convincing modern women to approach it is a totally different business. For more than five decades, Valentino has been storming out its couture collection season after season and what really protrudes the brand on the couture map of the world is their wearable approach. Making haute couture wearable is the key. If there’s anyone who can make a basic white poplin shirt a moment of couture when paired with long skirt, narrow in the front with flared train in the back, it has to be Pierpaolo Piccioli, Creative Director of Valentino — a new take on casual couture. Nearly a year in and Valentino caterwauled its response to pandemic with the showcase of its Haute Couture Spring Summer 2021 collection — Code Temporal — virtually.
The oozing allure and grandeur of Valentino Haute Couture 2021 kicked-off lambently with the brand illustrating its latest collection and awe-impelling fashion ruffles plodded over for months. The show opened with ivory perforated cape heavily decorated with braids, carres and bows. This was effortless, but not bashful on making Valentino woman feel special when paired with silk cady trousers. By outfit three, a superb bourette draped dress in chocolate brown that was reminiscent of the quirkiness but perfect for a young woman of today, it was apparent that Valentino was going to break up the references with a few gorgeous pieces untied to any narrative really — nothing figurative, what followed after was fearless layering, turtle necks, pastels and silhouettes that transformed from chic daily wear to heavily gilded voluminous gowns.
Ivory silk caped dress, tops or the off shoulder bright pink coat could bear a glancing resemblance to some iconic red carpet appearances — but it doesn’t really matter. What does is that silhouettes looked so young, relevant and neatly crafted and the delicate workmanship. In the way the pleats fell, the way the sheer fabrics seemed about to reveal something while keeping it hidden. The sense of precious heritage artisanship was also evident in the handworked embroidered pieces. Evening dresses stood as a master class in the flawless refinement that has been the trademark of Valentino since 1959. One in particular, a strapless draped aquamarine bustier dress entirely embroidered with a mesh of iridescent silver sequins had a timeless vibe to it that any woman would cherish. With sequins being the order of the day, gold, silver or magenta, the voluminous silhouette that really made a statement was the closing copper organdi dress. It moved and swirled so smoothly that it was nothing but reminiscent of a gothic ‘fairytale’ narrative. What the designer seemed to have in mind this season was the sense of weightlessness from pandemic, hence the parade of light, fluttery, oh-so-feminine clothes.
Apart from the really worked out couture pieces, the large, voluminous and extravagant had been flipped this time for other pieces in the collection. Layering of hoodies, sweaters, board shorts, and shirts paired with capes and lattic-worked coats dominated the runway. Minimalism, elegance but taking the daring route with popping colours for menswear was evident. If the ensemble was entirely beige a dash of neon or bright pink was added to make the look standout.
A runway show is undoubtedly an icing on a multi-layered cake and the applause the cherry on top. There are so many ensembles and ideas that a showcase where everything is perfect is almost impossible, unless its Valentino! Valentino is one of the masters of couture — a brand who knows what draping is all about. It can crop silk chiffon around a bod and into flying panels, quivery ripples, and filmy, flippy hemlines like no one else. And his finesse with beading on tulle—say, on the front panel of a grege cotton resille dress embroidered with silver pearls and rhinestones — makes others' attempts look coarse by comparison.
Delicacy as a signpost of technique was also obvious in a top embroidered with champagne metal sequins. Fragile gold-and-crystal boots were a sterling accessory. But equally, there were outfits that seduced with their straightforwardness. For menswear, wool and cashmere camel coat with rose application and rust leather and wool coat embroidered with a net of bows (paired with menthe green turtle neck) was outstandingly chic, something anybody would love to recreate and wear.
There was a fearlessness in the fact that so much of it was so casually chic, in generally like the button-up shirt running up the crepe organza and silk skirts or down the savage popping colours turtle necks. But Piccioli's signal achievement has been to turn such casual separates into something new, irresistible and haute. What the designers seemed have had done was the way they have managed to take the foundations of haute couture—the incredible, time-consuming, numbingly detailed techniques—and applied them to their own curious vision of basics.
There could not have been a more perfect collection that this to the most fashionable day of couture.
Related Story

AFG College to launch new programmes from next academic year