The death toll from the massive earthquake rose to more than 12,000 people in Turkiye and Syria yesterday.The sprawling scale of the disaster that flattened thousands of buildings, trapping an unknown number of people, has swamped relief operations already hampered by freezing weather.Survivors have been left to scramble for food and shelter — and in some cases watch helplessly as their relatives called for rescue, and eventually went silent under the debris.“My nephew, my sister-in-law and my sister-in-law’s sister are in the ruins. They are trapped under the ruins and there is no sign of life,” said Semire Coban, a kindergarten teacher, in Turkiye’s Hatay.“We can’t reach them. We are trying to talk to them, but they are not responding... We are waiting for help. It has been 48 hours now,” she said.Still, searchers kept pulling survivors from the debris three days after the 7.8 magnitude quake that is already one of the deadliest this century, even as the death toll continues to rise.Turkiye President Recep Tayyip Erdogan visited one of the hardest-hit spots, quake epicentre Kahramanmaras, and acknowledged problems in the response.“Of course, there are shortcomings. The conditions are clear to see. It’s not possible to be ready for a disaster like this,” he said.Twitter was also not working on Turkish mobile networks, according to AFP journalists and NetBlocks web monitoring group.The window for rescuers to find survivors is narrowing as the effort nears the 72-hour mark that disaster experts consider the most likely period to save lives.Yet yesterday, rescuers pulled children from under a collapsed building in the hard-hit Turkish province of Hatay, where whole stretches of towns have been levelled.“All of a sudden we heard voices and thanks to the excavator... immediately we heard the voices of three people at the same time,” said rescuer Alperen Cetinkaya.“We are expecting more of them... the chances of getting people out of here alive are very high,” he added.Officials and medics said 9,057 people had died in Turkiye and 2,992 in Syria from Monday’s 7.8-magnitude tremor, bringing the total to 12,049 — but that could yet double if the worst fears of experts are realised.In Brussels, the EU is planning a donors conference in March to mobilise international aid for Syria and Turkiye. “We are now racing against the clock to save lives together,” said EU chief Ursula von der Leyen on Twitter.“No-one should be left alone when a tragedy like this hits a people,” von der Leyen saidDue to the scale of the damage and the lack of help coming to certain areas, survivors said they felt alone in responding to the disaster.“Even the buildings that haven’t collapsed were severely damaged. There are now more people under the rubble than those above it,” a resident named Hassan, who did not provide his full name, said in the rebel-held town of Jindayris.“There are around 400-500 people trapped under each collapsed building, with only 10 people trying to pull them out. And there is no machinery,” he added. The White Helmets, leading efforts to rescue people buried under rubble in rebel-held areas of Syria, have appealed for international help in their “race against time”.They have been toiling since the quake to pull survivors out from under the debris of dozens of flattened buildings in northwestern areas of war-torn Syria that remain outside the government’s control.A leading UN official called for the facilitation of aid access to rebel-held areas in the northwest, warning relief stocks will soon be depleted.“Put politics aside and let us do our humanitarian work,” the UN’s resident Syria co-ordinator El-Mostafa Benlamlih told AFP in an interview.The issue of aid to Syria was a delicate one, and the sanctioned government in Damascus made an official plea to the EU for help, the bloc’s commissioner for crisis management Janez Lenarcic said.A decade of civil war and Syrian-Russian aerial bombardment had already destroyed hospitals, collapsed the economy and prompted electricity, fuel and water shortages.The European Commission is “encouraging” EU member countries to respond to Syria’s request for medical supplies and food, while monitoring to ensure that any aid “is not diverted” by President Bashar al-Assad’s government, Lenarcic noted.Dozens of nations, including the United States, China and the Gulf States have pledged to help, and search teams as well as relief supplies have already arrived.The European Union was swift to dispatch rescue teams to Turkiye after the massive earthquake struck the country on Monday close to the border with Syria.But it initially offered only minimal assistance to Syria because of EU sanctions imposed since 2011 on Assad’s government over its brutal crackdown on protesters that spiralled into a civil war.The Turkiye-Syria border is one of the world’s most active earthquake zones.Monday’s quake was the largest Turkiye has seen since 1939, when 33,000 people died in eastern Erzincan province.In 1999, a 7.4 magnitude earthquake killed more than 17,000.

US shoots down China balloon

China says balloon over US is civilian vessel blown off course

Boeing delivers last 747, saying goodbye to 'Queen of the Skies' 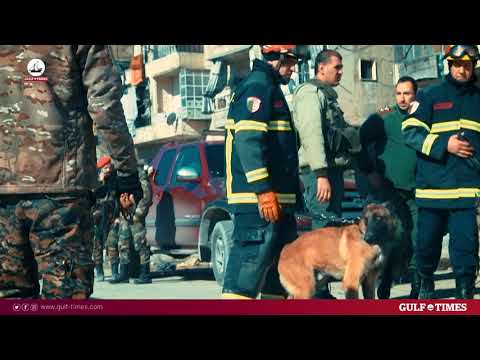