Are you looking for the perfect accessory to complement your professional wardrobe? Look no further than the French luxury heritage Masion, the answer to your style needs. Faure le Page offers a range of quality leather goods and accessories that are perfect for work attire. From stylish handbags to wallets, Faure le Page pieces can add sophistication and elegance to any look.Each piece is made with traditional Parisian craftsmanship, and features luxurious leather materials, modern design, and thoughtful details. With Faure le Page, you can look the part without sacrificing functionality or style. This edit consists of leather goods from the brand that highlights its iconic pattern print, including its Quiver Saga bag, Ladies First Saga Pochette, 6CC Wallet Etendard Saga, 4CC Card Holder Etendard, and the best-selling Daily Battle 19 bag. These products feature the Ecailles scale motif as the house signature. This motif – at once armor and ornament, evoking dragons and mermaids – confers power and allure to its wearers.The artisan screen-prints the Ecailles scale pattern onto the weave of the canvas in steps, using different stencils. This demanding technique is intricate and requires the hand of a virtuoso. This method enables Fauré Le Page to pair superlatively strong canvas with the embellishment reserved for the finest of fabrics.

On the occasion of the Qatar National Day on December 18, the Amiri Diwan announced that Sunday 18/12/2022 will be an official holiday.

'Welcome to Qatar' ceremony on the Corniche Myriam Fares and Maluma will open Live Stage with headline solo performancesIt's time to let the party begin, and 'Live it All in Qatar'. FIFA World Cup Qatar 2022 fans are in for a treat as two mega entertainment and festive activations will be launched Saturday, just a day before the first match of the tournament between hosts Qatar and Ecuador.These are the FIFA Fan Festival at Al Bidda Park and the street festival on the Doha Corniche.Gates will open at 4pm, with the inauguration beginning at 7pm with a live broadcast of the 'Welcome to Qatar' ceremony on the Corniche.Following that, Lebanese singer Myriam Fares and Colombian star Maluma will open the Live Stage with headline solo performances as well as a world-exclusive duet performance of the official FIFA Fan Festival anthem, 'Tukoh Taka' (featuring Nicki Minaj, Maluma and Fares), which was released Friday.The performances by Fares and Maluma will be the first of many by top global music acts and local artistes over the next four weeks, with international award-winning musicians Diplo, Kizz Daniel, Nora Fatehi, Trinidad Cardona and Calvin Harris to be brought to the Live Stage by FIFA Sound.On opening day, the Fan Festival will be open from 4pm-1am. Hayya Card is mandatory to gain access to the FIFA Fan Festival.“Fans from all over the world can look forward to 29 days of football, music, culture and lifestyle – a true festival of football,” a FIFA statement said.The FIFA Fan Festival is the perfect place to watch FIFA World Cup matches live in a buzzing atmosphere, while also enjoying an exciting football and entertainment programme. Join 40,000 fans and enjoy all 64 FIFA World Cup Qatar 2022 matches live on the mega-screens. Also on offer will be unique global and local culinary experiences.Besides, many sponsor activities, dedicated football exhibitions and an official FIFA Store with licensed FIFA World Cup products await football fans.A test event held on Nov 16 was a huge success, with the venue witnessing the enthusiastic participation of a large crowd.The FIFA Fan Festival also houses the Fan Engagement Centre behind the Information Desk. It will provide basic consular services, support for fans who are facilitating fan gatherings, walks and performances, as well as serve as an outlet for fans to raise any concerns in a safe, fan-focused environment. It will also host fan engagement activations with tournament ambassadors and serve as a co-ordination hub for the SC’s Fan Leader Network.More details can be found at https://www.qatar2022.qa/en/fifa-fan-festivalMeanwhile, the Corniche will be home to "Qatar’s global street carnival along Doha’s iconic 6km waterfront", starting Saturday. It covers the stretch from the Museum of Islamic Art to Hotel Park (Sheraton).The atmosphere along the Corniche will celebrate nations – allowing fans to connect from all around the world. The activation will include 150+ food outlets, live concert stages, 'Welcome to Qatar' water and light shows, roaming performances, arts, culture and story-telling, family-friendly entertainment, Bedouin Village and official FIFA merchandise.The timings are from 12noon until midnight daily, with entertainment shows taking place from 3pm to 11pm.The waterfront has been decorated with palm frond-shaped lighting poles that reflects the Qatari heritage. Pedestrian underpasses and plazas have been constructed to facilitate the movement of people along the Corniche. To enhance the aesthetics of these underpasses and plazas, sculptures and artworks of various Qatari and resident artists have been installed, as well as cafes set up.The Doha Corniche has been decorated with 1,440 palm frond-shaped lighting poles in harmony with the sprawling palm trees on the Corniche along with the provision of 655 lighting poles with distinctive features in the central Doha area.A key part of the celebrations, 'Welcome to Qatar' is a must-see for all during the tournament, featuring the Circle of Lights – a shimmering circle suspended above the water that transforms to poetically narrate wonderful stories.Throughout the afternoon, dancing water fountains will bring the FIFA World Cup Qatar 2022 Official Soundtrack to life. When the sun goes down, a stunning symphony of pyrotechnics, drones and water effects will light up the sky – all set to an original orchestral score.After the opening day, shows will take place daily at 3pm, 3.30pm, 4pm, 4.30pm, 5pm and 5.50pm throughout the tournament.Visit https://www.qatar2022.qa/en/live-it-all-in-qatar/the-corniche for more information.How to reach* FIFA Fan Festival (only Hayya Card holders allowed)Venue: Al Bidda ParkNearest metro stations: West Bay Qatar Energy (Red line), Al Bidda (Red and Green lines), Corniche (Red line) – exit onlyFans can also hop on the Shuttle Bus Loop or a Stadium Express Bus, Park & Ride and be dropped off at designated locations for taxi, Uber and CareemMore information about timings and other details can be found at https://www.qatar2022.qa/en/fifa-fan-festival* Corniche street celebrationsVenue: Corniche, from the Museum of Islamic Art to Hotel Park (Sheraton).Nearest metro station: Souq Waqif (Gold line), Corniche (Red line) – exit only, West Bay Qatar Energy (Red line), Al Bidda (Red and Green lines)Visit https://www.qatar2022.qa/en/live-it-all-in-qatar/the-corniche for more information about timings and other details. 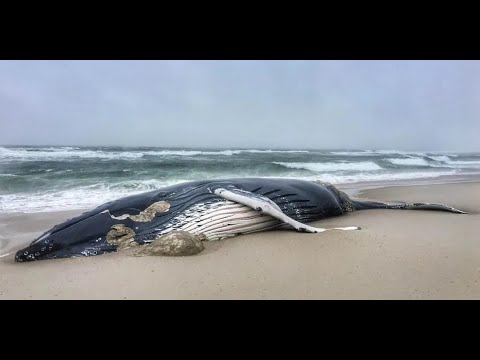 Members of the Northwest Atlantic Marine Alliance perform a necropsy on the carcass of a humpback whale at Lido Beach in Long Island, New York. The male humpback washed up on the shore of Long Island early Monday. AFP 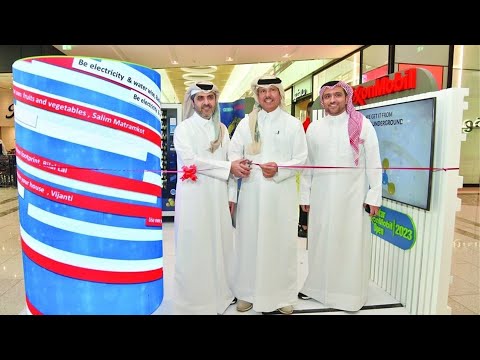 Participants take part in the virtual reality game installed at Doha Festival City as part of promotional activities to mark the launch of the Qatar ExxonMobil Open 2023 taking place at the Khalifa International Tennis and Squash Complex on February 20 to 25. Video: Shaji Kayamkulam 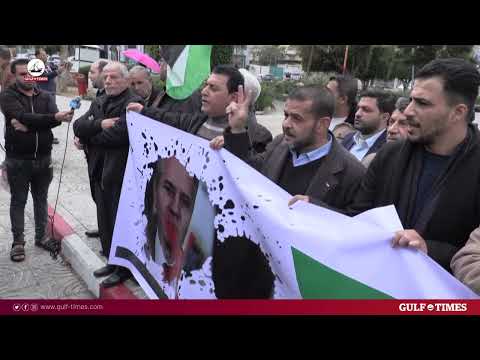 Media
Palestinians in Gaza protest against US Secretary of State's visit

Palestinians gather during a protest against US Secretary of State Antony Blinken following his visit on a Middle East tour aimed at curbing the worst outbreak of Israeli-Palestinian violence in years. AFP

Al Meera Consumer Goods Company has opened its latest branch in Lusail City to provide the daily needs of the people in the sprawling modern city.The move is part of Al Meera’s commitment to ensuring that all Qatar residents and visitors have easy access to shopping services as the country continues to witness rapid urban development.Al Meera Lusail branch was inaugurated in the presence of Yousef al-Obaidan, CEO of Al Meera; Abdullah Hamad al-Attiyah, CEO of Qatari Diar; and a group of Al Meera senior management.The opening of the Lusail branch forms part of Al Meera’s ambitious expansion strategy to guarantee that all community members have hassle-free and unhindered opportunities to shop for their essential goods with comfort in all parts of the country.As a national retailer with the largest stores network in Qatar, Al Meera seeks to provide residents and guests of Lusail City with their daily needs of various high-quality local and imported commodities and food products at competitive prices, in addition to providing a comprehensive, modern and easy shopping experience.The Lusail branch features underground parking.The branch is another mini-mall location that will offer a wide range of food and beverage options in addition to services to facilitate the daily lives of its customers.A Starbucks and Krispy Kreme will soon open their doors to customers on the ground level, which is the same level as Al Meera, while the upper level will have an expansive food court with food and beverage retailers such as Texas Chicken in addition to other retail outlets, such as Khulud Pharmacy.Al Meera boasts 25 mini-malls of the same format in different locations across the country to enhance customer experience, support community development, and bring retail and other services close to them under one roof.As Qatar gears up to host football fans from around the world during the 2022 FIFA World Cup, the opening of the Fox Hills branch and 10 temporary branches in different locations across the country will facilitate easy shopping services to residents and visitors as they will have Al Meera branches even closer to them especially with the road closures in multiple areas, thus contributing to customers’ overall experience and the success of the tournament.The branch will feature many sections like other Al Meera’s modern stores, such as fresh fruits and vegetables, dairy, cosmetics, butchery, fishery, bakery, and delicatessen, as well as a wide array of high-quality local and international products.Al-Obaidan said, “We are excited to open our state-of-the-art outlet in the fast-developing Lusail City. The branch is another step to provide Qatar residents and visitors easy access to convenient shopping irrespective of which part of Qatar they are. We will continue to expand our branch network to ensure that all parts of the country are covered, and our clients enjoy an excellent shopping experience.“As Qatar welcomes over 1.5mn football fans from across the world in the coming weeks, Lusail Fox Hills branch will serve as an excellent choice for the fans in Lusail area, as the city is home to one of the 2022 FIFA World Cup stadiums, Lusail Stadium, where many matches and the final game of the tournament will be played.”Al Meera is committed to making the shopping experience exceptional and more valuable for its customers by offering competitive prices on all its products, regularly launching promotions, and rewarding customers through its loyalty programme, Meera Rewards.With over 68 branches across the country and still counting, Al Meera is keen to serve all segments of society with dedication and excellence in accordance with international shopping standards and evolving customers’ needs.

Sunday, November 13, 2022
Load More
SIGN UP FOR THE GULF TIMES NEWSLETTER
Our biggest stories, delivered to your inbox every day.
See all newsletters.